Interesting way of putting it...

I've got an existing, legally binding contract, yes. But I have received a better offer. What should I do?

(a) announce to all the world that I'm switching mid-season
(b) talk to my legal advisors first and stay quiet
(c) politely say thanks but no thanks, I have an existing contract.

I guess I would have a good think about it, since it is a great opportunity. In any case we have the answer right here: Gilmore learned that her contract with Menikini-Selle Italia would not allow the transfer, and she decided to remain with the Italian squad for the remainder of the season.

Don't we all know that feeling?

From CN, quoting Cancellara after his breakaway stage win in the Tour of Switzerland: "Kim Anderson was shouting to me that I had to keep going strong, to go for it, go for it, but in my head I was thinking, 'where is this finish line?' I knew that the sprinters behind me would accelerate to 70 kilometres per hour whereas me, on my bike computer, I wasn't even doing 60. So I was a bit scared and was wondering where the hell the finish was."

Don't we all know that feeling of impending capture? You've gone first a long way out and are just hoping the bunch doesn't catch you before the line. Except if it was me I'd be going well under 50kmh, it would be a crit and the bunch sprinters would be lucky to crack 60, if that. It still matters!
Posted by gtveloce at 6/21/2008 09:30:00 am

2 wins in a row for McEwen

Well he knows how to win, and how to prepare to the level he needs. And he also has a bit of experience at 'doing it on his own'. But he has also had a few guys helping him these last few years - with spectacular launches like Steegman's 2 years ago and more recently a couple of Lotto guys who would expertly move him into the final corners first. But come July there will be no such help as protecting Evans will be task numero uno. McEwen will have to jump on someone's wheel and fight it out with the big trains, assuming the trains actually run this year (it will be a bit grim without Boonen and Petacchi). It may be the right year to be on your own in the sprint, actually.

Boy, was that short. OK, he claims his drink was spiked and it wasn't his fault - God knows I believe him, too - but at the 'I'm sorry' press conference last week, Boonen said that he would take 'a short break' from racing. Damned short, since he is starting in the Ster Elektrotoer today.I'm guessing won't try to bring any attention to himself by winning any stages...

He alawys looked the goods, although suspicions have clouded his recent career. Now he has shown his 2008 form, who will be able to beat him to Paris? Evans will clearly try, and may have the edge in longer, flatter TTs, but he may not have the advantage elsewhere. Whilst Cadel has Popovych to help him in the mountains, Valverde also has Tour-winner Pereiro up his sleeve. It's looking like a real dogfight, once again. Throw in some rejuvenated Frenchmen like Dessel, plus almost anyone on teams CSC and High Road and it's looking good for a boilover in July. From CN: Overall winner Valverde reckons the Critérium du Dauphiné Libéré is one of the best on the cycling calendar. "This is the most important victory of my career so far," said the Spaniard. "Because of the prestige of this race but also because of the time of the year when it's held. This week allowed me to judge the condition of my adversaries. I came with a good condition myself after the training camp we had in the Alps."

Alan Peiper is a rough, tough Aussie battler from the old days. No easy path to the pro peleton for him. And he recently assessed Michael Rogers' form in the mountains..He noted that the glandular fever had passed and that he 'looks good', which is apparently what really matters. Well, we know what he meant - I think. From CN: "Michael has had a good progression," his Team High Road directeur sportif Allan Peiper said. "His first race back after so many different problems was the Tour of Catalunya last month. His weight is down. He looks good, that's the main thing. He came to a training camp in the Pyrénées for three days and he was riding his time trial bike in between the mountain sessions. Now we have to see his resistance and his recovery."

Weight down, looks good. Yep, that's what it takes.

No way can I beat this guy, so I did anyway

Well so it seems. 'The Murcian appreciated the uphill terrain in Privas. "I'm a complete rider," he admitted. "But as a sprinter, on a flat road, there's no way I can beat riders like Hushovd. Today's sprint was a special one. I accelerated with power 300 meters before the line."'

Yeah, OK, Valverde's a bit of a sprinter, but to beat Hushovd? In a sprint? What's wrong with the world? Apparently the uphill finish did him in. So Hushovd is strictly a biggest-cog high-end speed on the flats kind of guy. Or - my personal preference - he just chose the wrong gear...
Posted by gtveloce at 6/10/2008 08:37:00 am 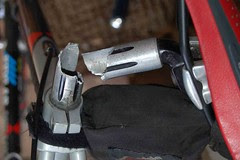 3TTT seatpost failure_0432
Originally uploaded by gtveloce
Doe sit look like a strange angle? It's a lightweight 3TTT seatpost that fitted into the slightly smaller than 'usual' diameter seat tube of my cabon-framed Look KG76. You can see that it has had fluting milled out and painted black. It and the Look frame (with Mavic ensemble) were sold new to me by Steve Hogg in 1990, so it was about 17 years old when it finally snapped, although it wasn't used for maybe 5 or those years and was never my only bike.

Did it look like it was about to fail? Nope, not at all. I looked and looked again several times at this very component and saw nothing untoward. Did it make any sounds or strange sensations? Well that's harder to answer... maybe. For perhaps 3 or 4 years the bike made a strange creak that seemed to come from the saddle, and the "fix" was to lower the saddle slightly. However I swapped saddles somewhat later and raised the seat height without inducing the creak. So I thought it was indeed saddle-related. Nevertheless it made me nervous and I feared that the carbon frame (with bonded aluminium lugs) was getting "flexy". So I examined it very carefully and could find no cracks or even a creak.

However 50 metres before it broke I felt that the saddle had swung very slightly to one side. Not an especially unusal event as the post can't be over-tightened without cracking the carbon tube. So I slowed to stop but had to get around a corner first... and it was in that corner (at about 25kmh) that 2 things happened. I leaned the bike at a small angle and I put weight on the saddle. (Bear in mind that 1km earlier I had descended at 50kmh and took a hard left hander - seated - at speed without drama.) Anyway, I think now that the crack was invisibly growing from the fluting and gradually circumnavigating the seat post. Only the merest connection remained when I entered that final corner, and I probably rose out of the saddle slightly and knocked the post out of alignment. When I sat down again the crack no longer aligned and simply collapsed under my weight. It took me by surprise and I ended up on the deck.

So the lesson is to expect the unexpected, look at everything for fatigue and don't push aluminium to destruction.. replace it early. And yes, I still use the KG76 today and the frame itself is fine. Touch wood (or carbon).
Posted by gtveloce at 6/04/2008 01:35:00 pm No comments:

Giro 2008: A certain strangeness about it all

It's was a strange Giro. Beautiful, with punishing mountains and stirring breakaways. Simoni trying, endlessly, to recapture his youth. Ricco attempting again and again to stamp his name on the record books. Sella brilliant, suprising himself as well as us with multiple stages; and  Di Luca's power slowly leaching away like a stain And then there's the overall winner: Contador. His 2nd Grand Tour win and possibly the most remarkable. Let's not forget that he had not trained for the distances involved in a 3-week Grand Tour, nor had he done the mountain repeats that would be "normal" training for the toughest stages. Instead he entered the race with an open mind and his body fresh. It wouldn't work for me, or for anyone I know, but it worked a treat for him. Of course he would have fancied his chances on some of the stages, just because he is at a decent professional level anyway; but to pull off the overall - against competition whose only goal in training has been this race is - indeed - remarkable. His physiology must be "perfect" for this style of race, and for the mountains themselves. Or the other riders are rubbish. I'll leave you to ponder how Contador has been able to achieve what seems to have been impossible for his teammates, Kloden (sick) and Leipheimer (still somewhere out there).

As Contador said himself: "I never could have imagined it – I was at home when the team called me...," Contador recalled of his entry into the race following Saturday's mountainous stage through the Alps. "The team wanted me to come here and I wasn't convinced that it was the right thing to do. ... Playing in the final to win it all – it's something that was unimaginable a month ago"