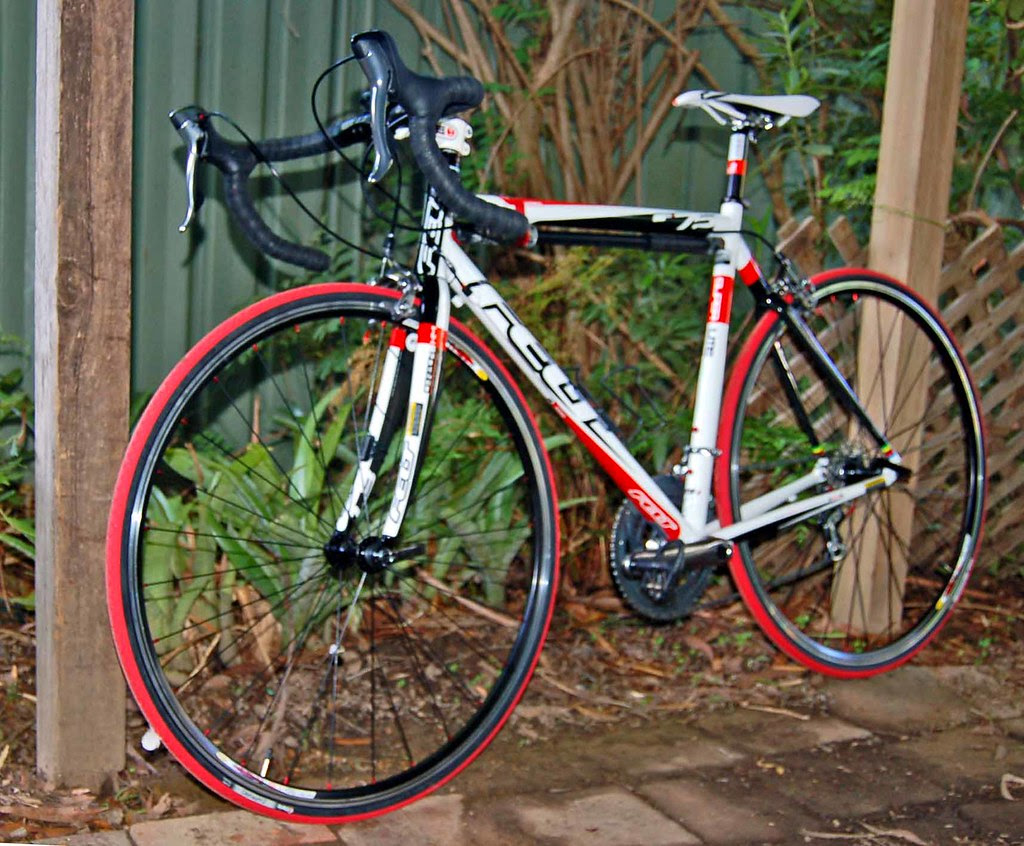 Well I paid good money for it, so I expect a solid ride with good, fast sensations that lifts my performance to a new level. Well actually I just expect a decent, hard-working bike. If it's faster than my Felt F50 or the old Look KG76 then that's a bonus.

The good news first. Nice build quality and very slightly lighter than my old F50 (talking sub 8kg fully built with pedals on my scales). The red, black and white paintwork is also very cool. Just stepping on the pedals for the very first time I thought "whoa, this is quick" - but that could just be gearing, eh?

Not being one to use first impressions as a definitive guide, I made some subtle adjustments mid-ride until the saddle was just so in terms of post height and rails, and measured everything as best I could to get my position to where a true comparison would be possible. And it still felt faster, if less so. The trouble with first impressions is that mere change - just being different - can fool you into thinking it's "better". And laying out a couple of grand psychologically puts you into a defensive 'of course it's better' frame of mind anyway. Even so, first impressions weren't bad, so that's good.

The not so good news. Nothing to blame Felt for, the fit and finish is excellent for the sub-$A2,300 I paid for it. That's around $200 cheaper than the 6 year old F50 was when new and half the 1990 buy price of the all-carbon Look. However a bike is only as good as its assemblers can make it and the LBS that put it together wasn't 100% on the money. (I still like 'em though!) Trouble is I bought it from an LBS that really specialises in mountain and kids bikes. So I had to remove the plastic protective bits, the bell and the streamers. OK, I'm joking about the streamers.

I also had to adjust the headset and reroute a brake cable to make for better free movement. And tighten a few bolts that were looser than I expected.

The empirical data. So is it really faster? Well that's a harder one to answer as at age 52 with a few kids to distract me from real riding my fitness is up and down. So I have to remove the outliers in the data and "normalise" a few things. All things considered, my 'standard' rides were immediately faster - an astounding 2km/h over 30km and amost 3km/h better over 50km. I was stunned. It not only felt (ha ha) faster, it was faster. Sadly - call it 'new bike fever' - after a month the gains had almost completely disappeared. I think I just got used to it. After averaging it all out and taking into account fitness and weather variations the F75 is still up on the old F50 by 0.5kmh average overall and I'm prepared to say it has an advantage, but it's a small and diminishing one.

In terms of power I really don't expect much if any variation. I'm the same person with the same potential, and the bikes are set up pretty close to "the same". So the power I can put out should be about the same, if I have set it up right! And I haven't been able to do really fair tests as my ibike got drenched in some wet weather and has started to really eat batteries. However the few measurements I have got out of it actually do show gains in power on the flat and on "power" hills of around 20-30W average (5-10% grade). Maybe. It gets murky when comparing steeper climbs as the new bike has a compact 34/50 crankset whereas I have 39/50 on the older bike. It ain't apples to apples but I do prefer the 34 over the 39 for most hill efforts (talking 15-20% folks). Maybe the weather has been more conducive to me pumping out the Watts on the fresh new bike, or this is just normal variation in daily average wattage. I'll try to do more scientific testing as soon as I can. For now I feel faster on the new bike and it's showing in slightly higher speeds and power outputs. But I'm wondering if I should actually be getting faster speeds and lower average Wattage... hmmm.


What else can I say? Well it's standard box-section Mavic clincher rims on both bikes but the new bike has a stiffer single-cross front wheel lacing pattern. If anything the stiffer front wheel explains the 'faster' feeling, and probably translates into better overall performance - at the expense of comfort. As I really only do crits these days I'm not concerned, and the odd 50km road race isn't a problem. 150-200km road races may be different. It can be a bit jarring over rough roads.

Finally I have to say that the Dura-Ace components on my 6-year old 9-speed F50 have a better feel to them than the new 10-speed 105 groupset. Especially the gearshifting. In fact if anything I prefer the 9-speed 105 gears on the Look, circa 1998! Perhaps it all has to just wear in?

Verdict: Would I buy another one? I sure would! I'd be careful where I bought it and make sure it was set up perfectly, but it's definitely a killer bike for the money.
Posted by gtveloce at 7/12/2010 02:39:00 pm