From the "oh please" category... "The biggest regret of my career is quitting the Tour. I was fighting for the green jersey. I could have potentially won on the Champs-Élysées. I made a commitment to the track team and they didn't give anything back." 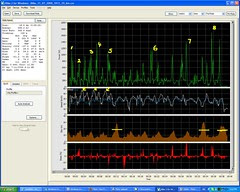 first race in 8 mths
Originally uploaded by gtveloce
Yes, well... I had gradually become fat and slow in the intervening 8 months. I hadn't been doing many miles, probably only 50-100km per week for the last year, so missing the entire "road season" in Australia was both a good thing - I'd have been left for dead on Blood Hill - and a bad thing - there was another 50kms of conditioning that I had left off my training diary.

So I hit this first criterium with little condition at all, bar some flat road ambling and some intervals on the indoor trainer. Ouch. My heart wasn't into it - or up to it - and I let the bunch go after 3 laps. You can see that I was consistent between numbered power peaks 1 to 5, and then it dropped off before i got going again whenever someone caught me, or I them. Power peak 8 shows me that (a) the ibike is exaggerating again - no way that was over 1600W - and (b) I had plenty in reserve. So I'm confident that by staying 'up front' throughout the race I can stay with them. Mind you, they were averaging over 34kmh, which is a bit of a stretch for me at the moment. I had anticipated averaging 33kmh at worst... or best, if you prefer. So I was hitting and exceeding my maximum by lap 3.

The yellow arrows are pointing out that the power peaks don't always align with maximum speed. Indeed it's on a slower part of the circuit - the uphill from the 90degree left turn that max Watts are generated. Whereas the top speed is downhill to the finish line.

The yellow lines show you where something was going wrong with the barometric readings - as these are laps of a circuit the altitude was fixed and should repeat, over and over. Not jump 10m or more! I'm guessing the battery was dying...

Slope is also a puzzle - 10% is possible but 20% is just not right. Battery? ibike head unit flexing? Me pulling the front wheel off the deck?

These small-medium errors add up to big - and inaccurate - power readings. You could safely halve these outrageous peaks!
Posted by gtveloce at 11/12/2008 09:29:00 am No comments:

Training a 37 yo L. Armstrong

Not so different from a 34 year old one really:
With Armstrong being 37 years-old, will Carmichael be monitoring any new or different parameters this time around? "It is basically the same thing as with any athlete, the most objective marker is power," said Carmichael. "Right now, it is just trying to see if we can get power to keep going up which we anticipate to happen. We also want to see that he is getting more efficient so his kilojoules will keep going down for similar types of workouts. "Now he is starting to get more specific with his training moving out of the foundation phase and doing a little more specific work for the bike; a little more threshold work; a little more speed work. He goes to the Astana camp in December then we are planning a camp right after that where he will get behind the motor a little bit and up the volume from basically doing 24-25 hours a week up to 28-30 hours a week of training. That's a big jump on just energy expenditure so everything just has to start simplifying," said Carmichael, who once served as the US National Coaching Director.

That's what I think I read: Armstrong is not necessarily looking for the position that will make the bike the fastest. "It has to be a perfect mix between position and power. If I am five percent slower due to the position, but have 25 percent more power, than that will be better."

Now he may be misquoted. He may be confused, or quoted out of context. Or he's being silly. Perhaps he meant that the 'fastest' position wasn't necessarily the most comfortable and sustainable, which is fine. Perhaps he meant that the most aerodynamic position wasn't necessarily the best overall, for whatever reason. But why the heck say that he'd compromise speed for 'more power'? Wouldn't less power and more speed be even better than the reverse? What use is the extra power if it doesn't increase his speed?

Email ThisBlogThis!Share to TwitterShare to FacebookShare to Pinterest
Labels: Cyclovia 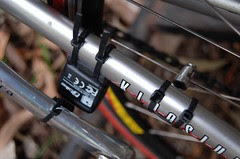 cadence and speed sensors_0532
Originally uploaded by gtveloce
To get the ibike's trainer mode going I needed to add these rear-wheel and crank sensors. Makes sense. I chose a power output map that looked close to my Elite trainer and let it rip. Guess what - it works!

The ibike needs a 'trainer mode key' download, too, but that's pretty simple. The ibike software accepts the key on your PC and the ibike head unit is unlocked via USB connection. Bingo, new feature set. 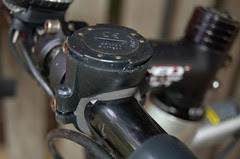 ibike wireless mount_0534
Originally uploaded by gtveloce
OK, so I ride a bike. Big deal - so do you, eh?

I have ridden bikes since about 1972 or so and have always used some method of calculating distance ridden, be it via a mechanical or electrical add-on or by simply estimating distance from a map. Electronic methods improved markedly from around 1980 and quickly became a fairly universal way to accurately measure distance, speed and some environmental variables like temperature. When heart rate monitors took off in the 1990s that became another useful data source for the bike racer or exercise enthusiast. More recently the ibike has put power measurement closer to a price point where serious club racers find it hard to say 'no'.

And now - finally! - here is my new wireless ibike mount. So I have ditched wires - another 'big deal', you say? But I have also gained a few other tricks in the process, like an inbuilt HRM, a cadence sensor and the ability to estimate Watts expended whilst riding on the indoor trainer. It makes my indoor training more quantifiable, more scientific (hopefully) and probably more fun.
Posted by gtveloce at 11/06/2008 09:40:00 am No comments: