Cinelli leather hairnet - blast from the past 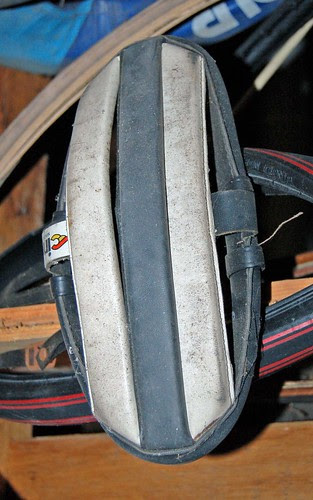 Cinelli leather hairnet_0144, a photo by gtveloce on Flickr.

Once, long ago, this is what racing cyclists wore on their heads to ward off evil spirits (if they didn't wear a cap and a cabbage leaf as well, anyway). Now they wear plastic and polystyrene foam. Which is weirder?

They were light and cool. They fastened with a simple strap and buckle. They did little to protect the head from anything other than minor object impact. But it's what we had, at least until the "esky" was invented, circa 1980.

The esky was a bulky, hot and heavy alternative that provided much better impact protection but suffered from being, umm, hot and heavy. It was avoided as much as possible - even scorned - at least until the design improved and it evolved into the lightweight, cooler and more effective helmets we wear today.

The problem with riding and winning consistently in the US is that you get typecast as a "US-based" rider; especially so when you win crit after crit. Everyone knows you are good - but who wants a 'crit specialist' in a WorldTour team? Well Bjarne Riis is taking a punt on one such prolific Aussie rider and I suspect he'll prove a valuable signing for 2012.

Cantwell To Saxo Bank-SunGard For 2012 | Cyclingnews.com

"Jonathan has won many races in the past four years whilst riding in Australia and the States and has shown he is a winner,” said team owner  Bjarne Riis​. “I feel he now deserves a shot at the very top level. He is a hard working person and a tough guy, and I believe he can further lift his level. So I see Jonathan as an asset for us in the stage races, when it comes to helping out J.J. Haedo in the sprints, or going for a win himself.”