Don't you love seemingly global competitions that deep down in the fine print exclude significant populations? Yes, I understand national and state laws are the usual "reason" for this but somehow I think it could be worked around a bit better, or at least made more obvious. Otherwise readers just waste their time looking at web pages and filling out forms. And whilst that's the point of this marketing exercise anyway it does set in train some negative feelings when you realise that you've just done what they wanted - for little or no return. You aren't likely to win anyway but in fact you were never even eligible. Sucked in, as they say.

CyclingNews is a familiar culprit and they are up to it again with this Specialized comp (and I like and use Specialized gear, by the way):

6. Unless otherwise stated, each Competition is open to all who are 18 years and over, except: 6.1 residents of Belgium, Norway, Sweden, India, Rhode Island, New York, Florida and Puerto Rico, New South Wales (Australia) and any country embargoed by the United States

Not forgetting this catch-all that doesn't apply in the case above but is another nagging irritant, especially given that CyclingNews started in NSW, Australia in the first place: 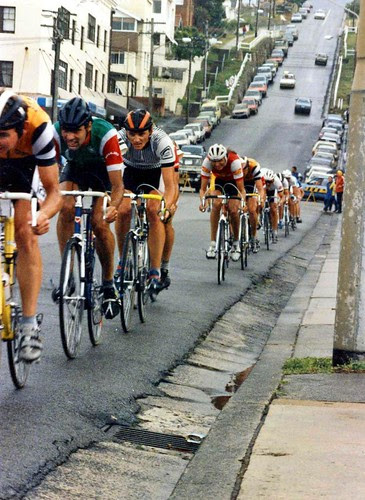 This is a wet Coogee crit during the Bank Race. Judging by the mix of toe clips and Look pedals plus the 'leather hairnets' it's probably 1987 or so.

Dean Woods was in the crowd but strangely enough he didn't recognise me (not that he should've!)

The Commonwealth Bank Cycle Classic was Australia's biggest road tour, running for 19 years until (I think) 2000.

Bling takes another win in Europe

Nice to see that Michael 'Bling' Matthews is back to his winning ways. Meanwhile Cadel Evans returns this week to contest Romandie after quite a long break. Given that he is skipping the Giro this year presumably he'll be fresher than last year when he starts Le Tour. And if that doesn't go well he can always say he was underdone. Let's hope we see no need for any such excuses.

Michael Matthews (Rabobank) won the 95th edtion of the Rund um Köln (Tour of Cologne), the race traditionally held on Easter Monday each year, at the head of a bunch sprint. The Australian under-23 World champion outsprinted Marcel Kittel (Skil-Shimano) and Giacomo Nizzolo (Leopard Trek) at the end of the hilly 203.5km race.

From here, the focus of the pro cycling world shifts towards the stage races. And now, after a month of physio, recovery and lighter than planned training, I get ready to start back at an old favourite race of mine, Tour de Romandie.

Email ThisBlogThis!Share to TwitterShare to FacebookShare to Pinterest
Labels: Matthews

Injured Aussie climber Matt Lloyd released by his team? For 'behavioural reasons'? That sounds about right

Or is he simply injured and struggling to regain form? He has been in the wars physically, especially with the back injury, and coming back to top form after any injury is hard enough (some of us never get back at all, do we?). Well that may well be, but you'd imagine Lotto would stand by him for at least a full season. As a side issue he is also just a bit too philosophical about life, isn't he? And we can't have that! Let's put him in the 'too much like Cadel' basket and move on. Perhaps he'll get an offer from BMC in due course?

The team strongly clarified that doping was not behind the decision but hinted at unspecified behavioral reasons for the termination of the specialist climber.

Lloyd won the climber's competition at the 2010 Giro d'Italia but had a difficult winter after being hit by a car in Melbourne in December. He underwent surgery on his shoulder and also suffered spinal injuries.

"Of late, subconscious elements have crept in slowly and steadily leading to a bogus phase of being so eager to be involved mixed with the slow process of recovery we cannot be 100 percent sure the first race will be of the highest quality, but thankfully the people surrounding me have blessed me with the confidence to once again feel the heat around the corner. Not to mention a brilliant team who’ve given me the opportunity to once again step it up a notch in order to remain directly driven towards the event I anticipate the most - The Giro D’Italia..

"If I've been bleeding in places you cant see, and feeling the affects of doors being locked, I’ve called the people who change the locks, and the gate is open...All I have to do is ‘open the gate’.."

"There was a lady and she was on her way to a Valentine's date and she was late," he explained. "She turned into a driveway and she wasn't looking. She said, 'sorry, sorry I'm running late for my Valentine's date.' I said, 'don't worry about it it's just my knee, make sure you're not late for cupid's arrow.' She was pretty nice and I just thought, shit happens, let it go."

It is his second back injury, following damage to his lower back in a crash at the Amstel Gold Race in 2009. “There’s damage to two or three parts of the upper part of the spine, which is okay for me because I think last year I broke seven of the lower ones so I’m trying to spread it out a bit,’’ Lloyd said.

The X Rays show it’s (vertebrae) a bit buckled and twisted due to the swelling, but generally according to what (the doctors) said that can slowly repair itself and everything can come back together quite smoothly.