Sudden interest in this shot of Camperdown velodrome 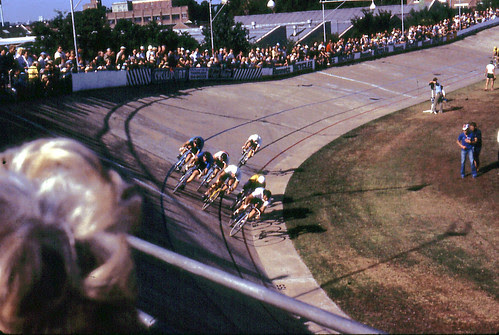 Why has this pic of Sydney's Camperdown Velodrome suddenly taken lots of hits on Flickr? Don't know.

This is the Sydney 1000 final in 1982. It was a warm day during a dry spell. The riders, officials and spectators are all (obviously!) much older now - and the velodrome is gone.

The advertising is interesting. Last time I Iooked Cyclesport was still a shop at Thornleigh - but I'm not so sure that Bennett Bicycles is still with us. Fortunately we do still have Tempe and Bass Hill velodromes to play on, and the rest... but a lot of memories went with this track.

I suppose I should mention that Camperdown velodrome replaced my local velodrome at Henson Park in the late 60s/early 70s. It was a massive, shallow saucer around the then Newtown RLFC home ground. Luckily I rode my (road) bike on it before the council ripped up the old track to put in better floodlighting. (Not that it did any good for Newtown, which was relegated anyway). Dulwich Hill bike club got the more compact Camperdown in exchange, at least until about 10 years ago when it was closed down, cleansed and remediated as parkland (apparently the previous use as a tip had left an excess of toxins).

For some reason I feel awfully sad about those 4 seconds. Cunego was meant to win this time, surely?

It's something about the company he keeps, I guess. I used to like Leipheimer's style and I guess I still do... a bit. But to my mind Cunego should have taken it. Just one of those feelings I guess.

Levi Leipheimer stole overall victory on the final day of the Tour de Suisse with a strong performance in the ninth stage, a 32.1km time trial won by Fabian Cancellara.

25m? Yes, that's a small velodrome. A TTT would be interesting...

With thanks to impactcycling forum for pointing it out..

I initially thought "ridiculous" but then warmed to the idea. There were somewhat larger but still small indoor velodromes during cycling's hey-day in Sydney early in the 20th Century, like the (140m?) Surry Hills board track (later moved to Canterbury before being added to the current horse racing reserve). And reportedly an even shorter and steeper(100m?)track in an old shed at Carlton near Hurstville. Some people believe that the shed still exists as an art supplies shop - and whilst I can visualise it (I've been there to check it out) it can't have been even 100 around, surely, and it must have reached the roof to get enough banking... perhaps it was just a bit bigger than this new London one... which is 25m!!

A hot lap is around 3.2 seconds or so... and the trick is to ride smooth with constant pedal pressure and stay low on the banking.

Anyone for a sprint?

Email ThisBlogThis!Share to TwitterShare to FacebookShare to Pinterest
Labels: velodromes

What we don't want = possible defendent getting 'awkward' with probable witness

I can understand Armstrong's position - he has a lot a stake and only one small (annulled) doping violation to his name (for topical cortisol, if memory serves) - yet here he is getting all "awkward" with a doubly-busted-for doping ex-team-mate who has gone public with a bit of a lively story. Be the yarn true or not, why bother talking with the guy? Let alone getting awkward about it. Was he just stilted in his conversation, or was there a bit more aggro there?

Tyler Hamilton, who recently went public with his claim that Lance Armstrong doped, had an awkward encounter with the seven-time Tour de France champion at a Colorado restaurant at the weekend, US media reports.

ESPN.com reports Hamilton was unnerved enough by the incident to inform his lawyers, who told the sports website they had formally notified US authorities of what they consider "aggressive contact" initiated by Armstrong.