Just what we all wanted to see, Web2.0 at its very best: Lance Armstrong's blood tests on the web. Catlin said that the actual program is still taking shape. "[Lance] has agreed to a couple of a few very fundamental points. One is his data, like T/E ratio and all that kind of stuff that a doping control is allowed to do will be on the web, so you can see it. 'Ah, your T/E ration changed today, what happened?' Like to see if he is taking EPO – all the actors to make it a very public campaign."

What about this enhancement to the website itself - some sliding controls that change the blood values, with respectively new maximum values for Wattage and VO2 max as you dial up the changes. And how about a new estimated time up L'Alpe d'Huez at those values... just so we can assess for ourselves what difference it makes to have higher haematocrit, for example.
Posted by gtveloce at 9/26/2008 03:31:00 pm

Email ThisBlogThis!Share to TwitterShare to FacebookShare to Pinterest
Labels: Armstrong

King Contador cruising. Why am I uneasy?

I have that queasy, uneasy feeling again. The Lance A. comeback. His protege Contador winning 2 Grand Tours in a year, 3 in under 2 years; one with little preparation, straight off the beach. And Astana, back in the thick of things, loaded with talent.

25-year-old Alberto Contador carved his name into the annals of cycling history by becoming the first Spaniard to win all three Grand Tours on Sunday in his home town of Madrid. The Astana star who had been denied his opportunity to defend his 2007 Tour de France title when the race organiser refused to invite his team had vowed to get revenge at his home Tour, and he succeeded.

If I trusted these guys - and I must admit it's a leap of faith to do so - would it be good or bad for the sport? Lots of publicity, sure, but have we really finished with the laundry here? Hopefully the blood passports are doing the job, because we need some indication of where fair is fair.

Email ThisBlogThis!Share to TwitterShare to FacebookShare to Pinterest
Labels: Contador, Vuelta a Espana

Laughing at puerile, self-indulgent Ch9 "Footy Show", outrated by laudable, watchable "QandA" on ABC. Maybe we are growing up?

Next step - a bike racing show? (Yes, I know, it's been done.)
Mobile post sent by gtveloce using Utterli.

Email ThisBlogThis!Share to TwitterShare to FacebookShare to Pinterest
Labels: sport on TV

Checking out Utterli, an utterly post-post modern version of Utterz. Not sure where this all endz, but it's nice to watch these crazy widgetized developers fight it out for web2.0 supremacy
Mobile post sent by gtveloce using Utterli.

Just because, here's a track hub 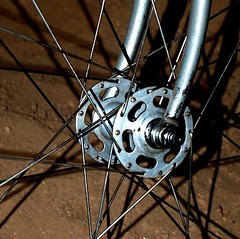 Track hub_0145
Originally uploaded by gtveloce
No reason, just thought I'd brighten my day with a look at my front wheel. It's just a track hub. It's attached to a wheel (also 'just a wheel') which fits into the front forks of my Colnago Saronni track bike. OK, they are Velocity Aerohead rims, I think, but you can't see 'em here.
Posted by gtveloce at 9/12/2008 01:49:00 pm 1 comment:

Pat McQuaid may wish to revise his words, or not, if they are correctly reported: "He'll probably never shut up the no-gooders but it might give him the opportunity to prove he can do it clean."

Lance returns: do we care?

Well it will kick up some dust, sure. Lance Armstrong's comeback is in the grand US tradition of retiring at the top yet seeking another "final" blaze of glory. Indeed it can't be easy to step out of the limelight and start a "normal" life, if cancer-survivor LA's life could ever be called normal. So a comeback - a well-planned, targeted one at that - could give LA another shot at proving whatever it is he's trying to prove. His innocence, perhaps?

He says he's clean and I take him at his word. He says it's for cancer-fighting publicity, but there must be something in it for him as well. Assuming he does come back, whatever the reasons, does he link with the cleaned-up residue that is Astana, banned from Le Tour 2008? Or does he seek a pure, clean break with the past? I hope the latter - but suspect he'll fall in with the "trusted" old Bruyneel team, irrespective. I'd like to be proven wrong on that.

Lastly, if he does join Astana and they get a berth at Le Tour (no guarantees there but probable), will he be top dog? One assumes so, but will it be the case if Contador has an edge in week 3? Contador's still young, so I suspect he'll roll over easily, but it won't necessarily be easy for him, either.
Posted by gtveloce at 9/10/2008 08:37:00 am

Anyway, for those new to addicted2wheels.com here's a summary guide.....