Confidence is everything - the psychology of cycling

Or the psychology of everything, really.

I can tell you how to train your guts out, how to identify your strengths and weaknesses and how to position yourself to win, but none of that will help at all if you don't truly believe in yourself.

I used to train 10 to 15 thousand kays a year - not enough, I know - but it got me into the ballpark (as an A-grade clubbie, anyway). I had some condition. I had some strength. I didn't fade too early. I was there.

I enjoyed the physical side of training and it got me fit enough to be in the game - but I needed some psychological help, too. I needed both the skills of a racer and the motivation to execute my plans. The skills came about by watching, by listening and by practising. By running it through my head as well as actually racing it out on the road.

Winning is first of all about surviving. Getting dropped is the pits. And if you have the condition - enough of it - then it's all about timing and positioning from there, really. Positioning and timing to avoid crashes, to avoid missing the break and to be there - in the right place, on the right wheel - for the sprint. Simple, eh? But how do you get it right?

My head had to understand that getting dropped hurts enough that I didn't want to get dropped ever again. And I had to be smart enough to recognise the signs and avoid the danger zones, those points in a race when getting dropped is a very real possibility. Sometimes it's positioning for a hill, sometimes it's just gritting the teeth, chasing and absolutely not letting them go!

My head also had to handle the fight for the break - be in it! Get in there, but only when it's the right move. Size it up, make a judgement. Then commit. Totally.

My head also had to mix it up in the fight for the pre-sprint positioning as well as the tussle for line honours. Sometimes it's frustrating, sometimes just plain dangerous. It's reactive and exciting, physical and mental. It's the end game and it's mostly played out in your mind!
Posted by gtveloce at 2/13/2014 11:36:00 am

Timely indeed, given my own situation. This is Lotto Belisol's Olivier Kaisen on his heart problem:

"At training camp in December I was able to train in perfect circumstances without any problem. Now I think my moderate season in 2013 might be caused by it." Kaisen first noticed the problem during the Tour Down Under in January."After the second stage at the Tour Down Under I didn't feel well. It had been a very tiring and extremely hot day and I had ridden much at the head of the bunch for André Greipel. I did start the next stage, but immediately after the start of the third stage I felt something was wrong. I was scared and together with sports director Herman Frison I decided to quit. He said I couldn't take any risk.

The thing is, and I know this from hindsight more than any analytical brilliance, as you tend to grow into your body over time, it so rarely surprises you. You simply get used to its quirks. After all, you don't get to experience what other hearts are like, although you may still realise that there's a huge diversity in what are "normal" rhythms and rates of beating. Some are fast, some are slow and some are all over the shop. Yet they "do the job". Mostly. So you get "used" to your own quirks and they fade into the background... until one day...


And if you race - or even train hard - you are putting a hefty load on that single point of failure. That load can be extreme in a race, especially if you are dehydrated or have some other variation from the "norm" that one day may create that "perfect storm" that is ischaemia. Now hindsight is a wonderful thing and I don't want to put anyone off cycling to their full potential - far from it - but we can't see into our bodies as we go about our daily lives (well, not without some help, anyway). We have to go by feel. And that's why we need to look after ourselves, eat, rest and train right, and keep a look-out for anything that feels 'unusual'. It could be a sign that shouldn't be ignored.

More screenshots of the "ischaemic event"... even more self-explanatory! 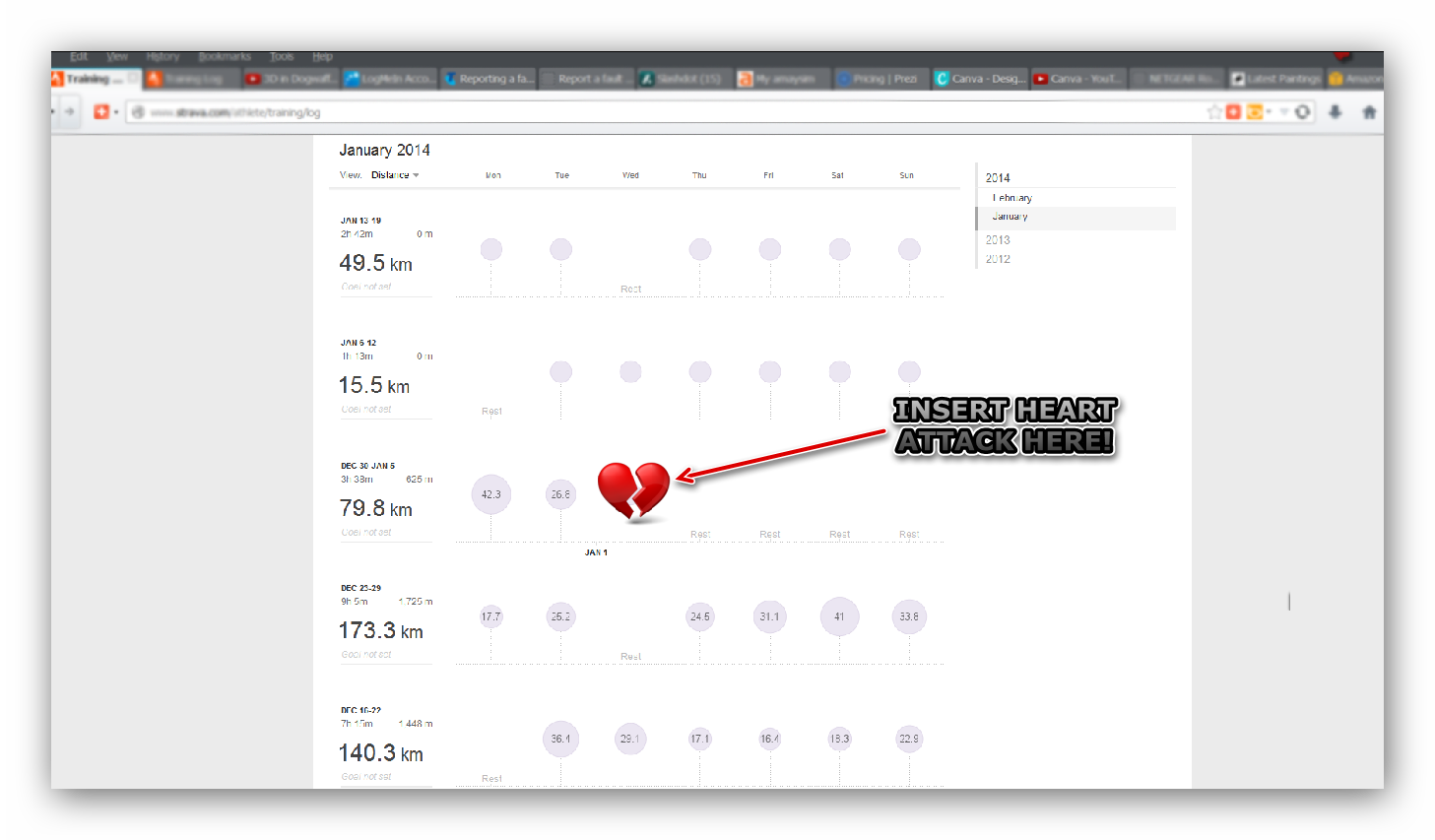 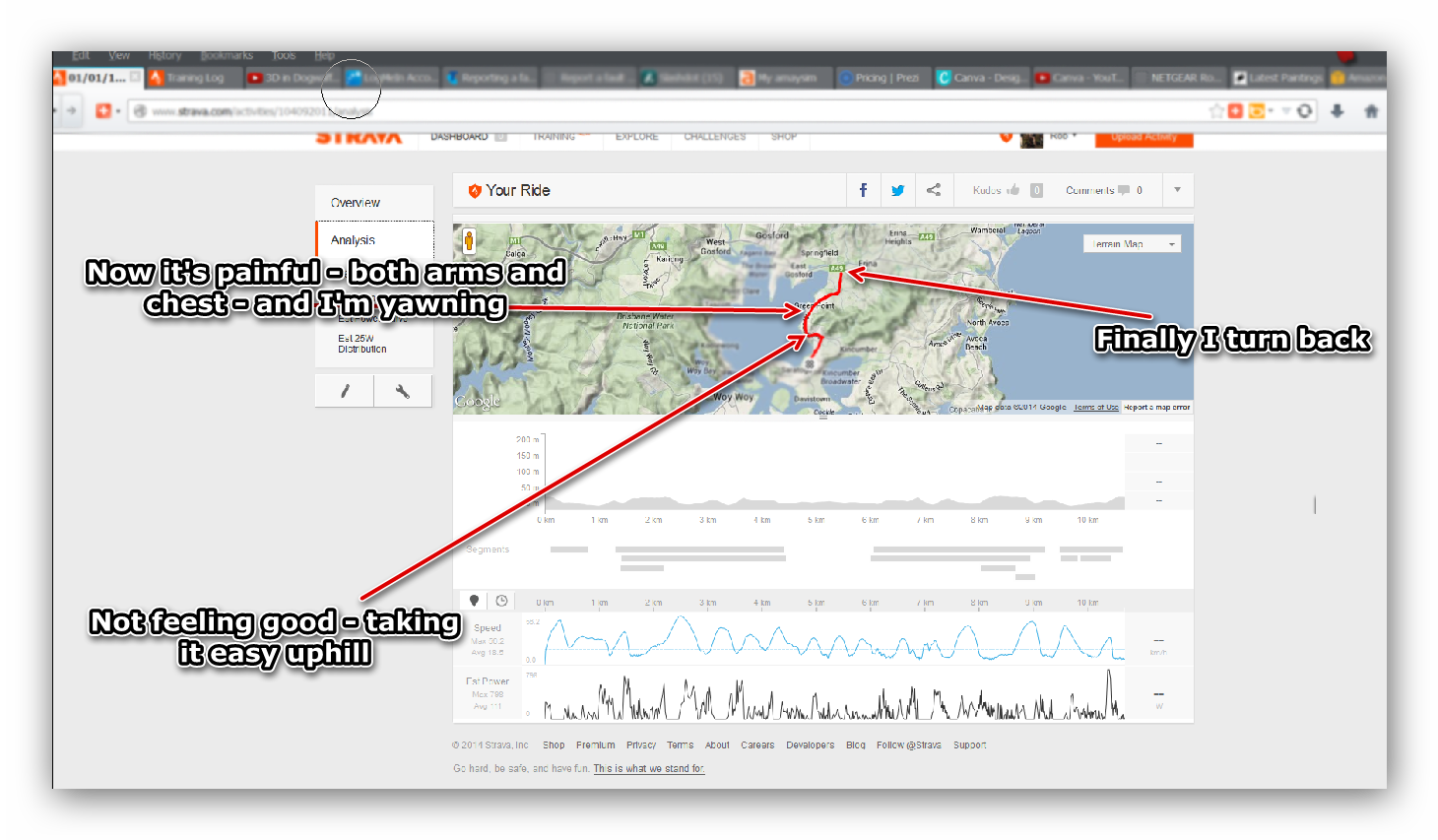 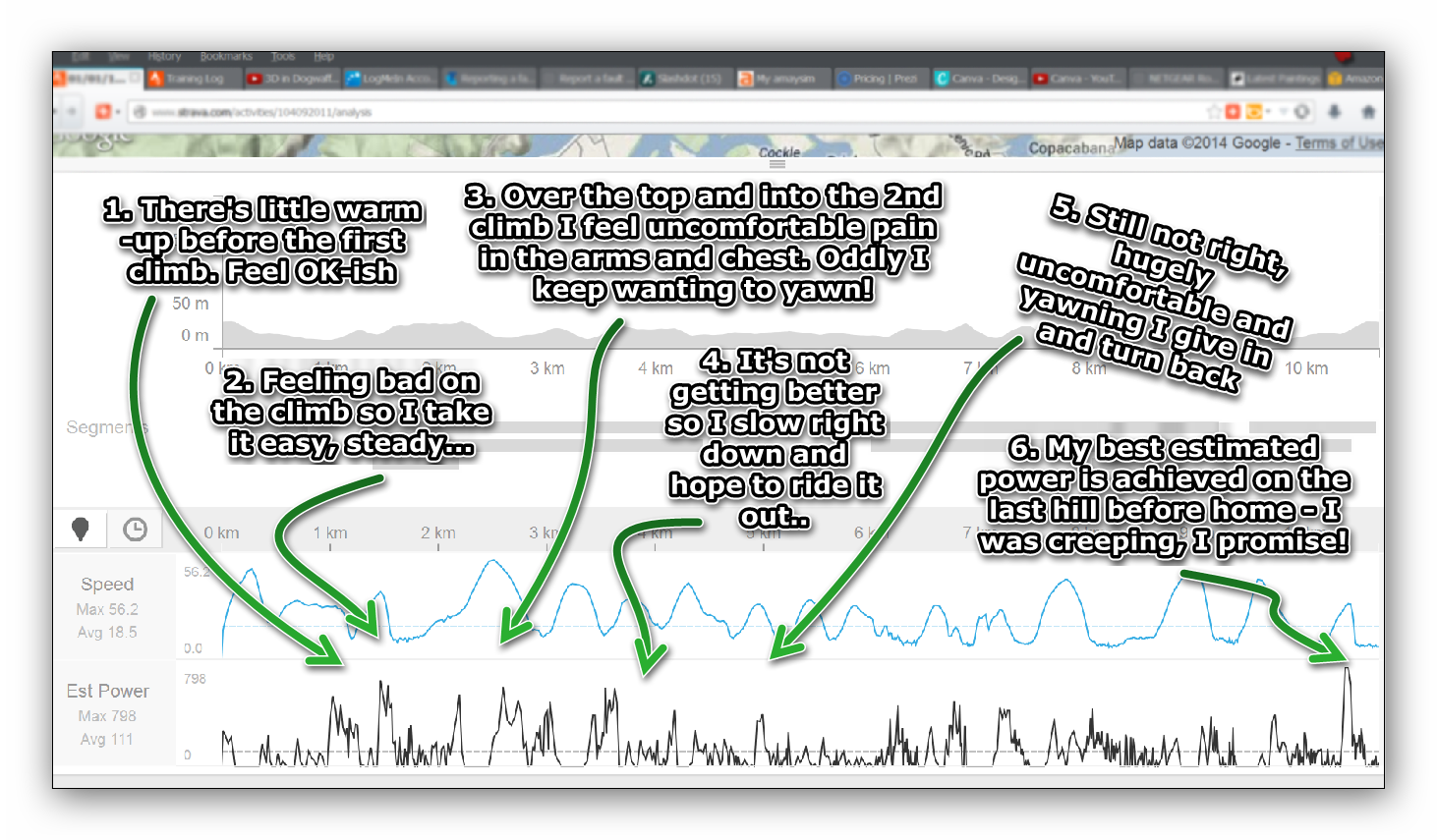 Did you want some pictures to go with that ischaemia, sir?

Did you read this: http://addicted2wheels.blogspot.com.au/2014/02/double-training-used-to-work-dont-let.html? Want to know more? Sure, how about some pics? No, not of the stents being inserted (although... now that I think about it, maybe tomorrow?) just some Strava screenshots of me having a "medical event" during a training ride....

It's fairly self-explanatory... 2013 wasn't a bad year for cycling but not great either. I peaked a couple of times with semi-decent months but got sick a few times that wrecked my race season (which turned out to be a good thing, maybe).  I was playing catch-up all year. And then 2013 ended and 2014 went off with a bang (or a whimper perhaps)... 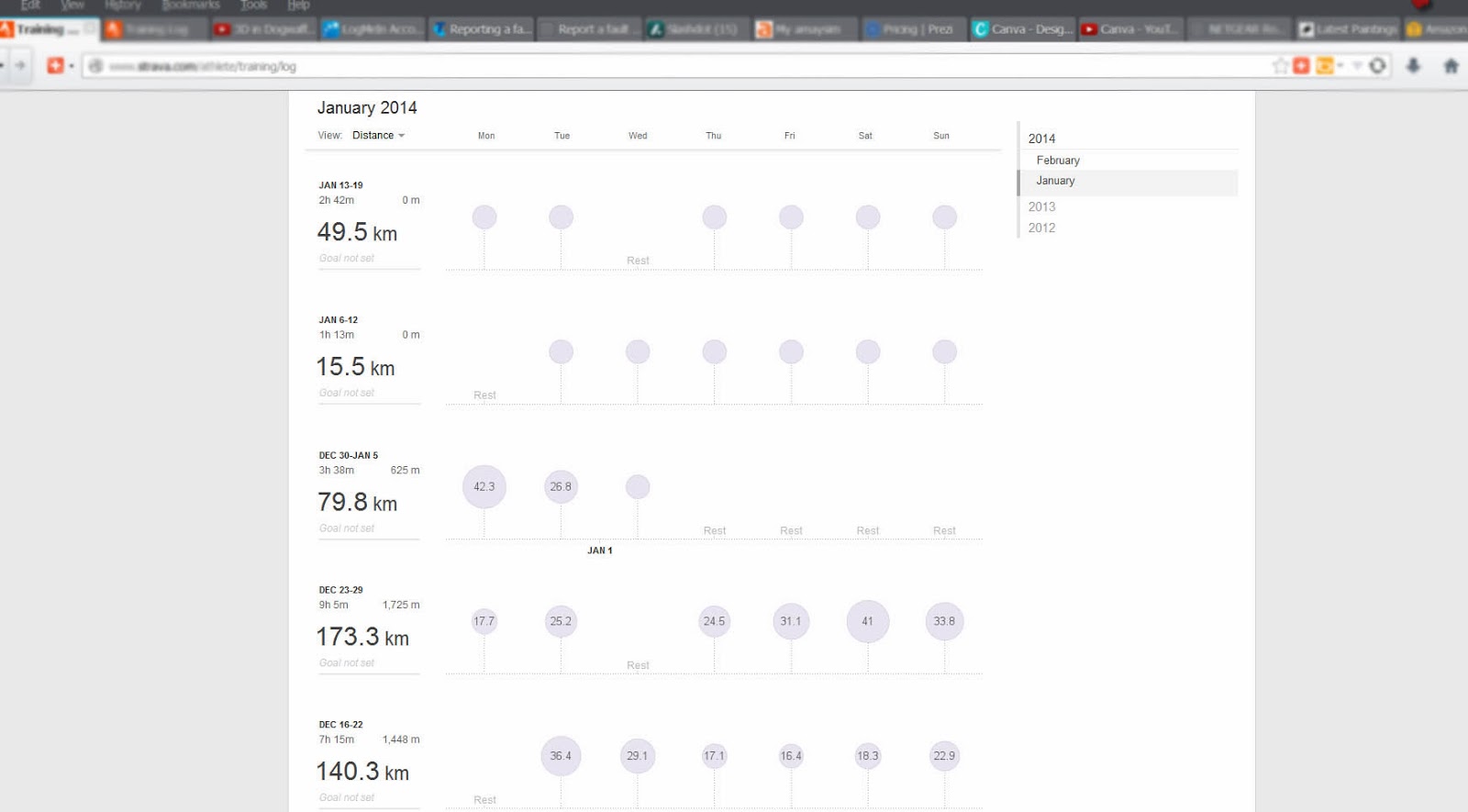 Just another year? And then... One ride too many! 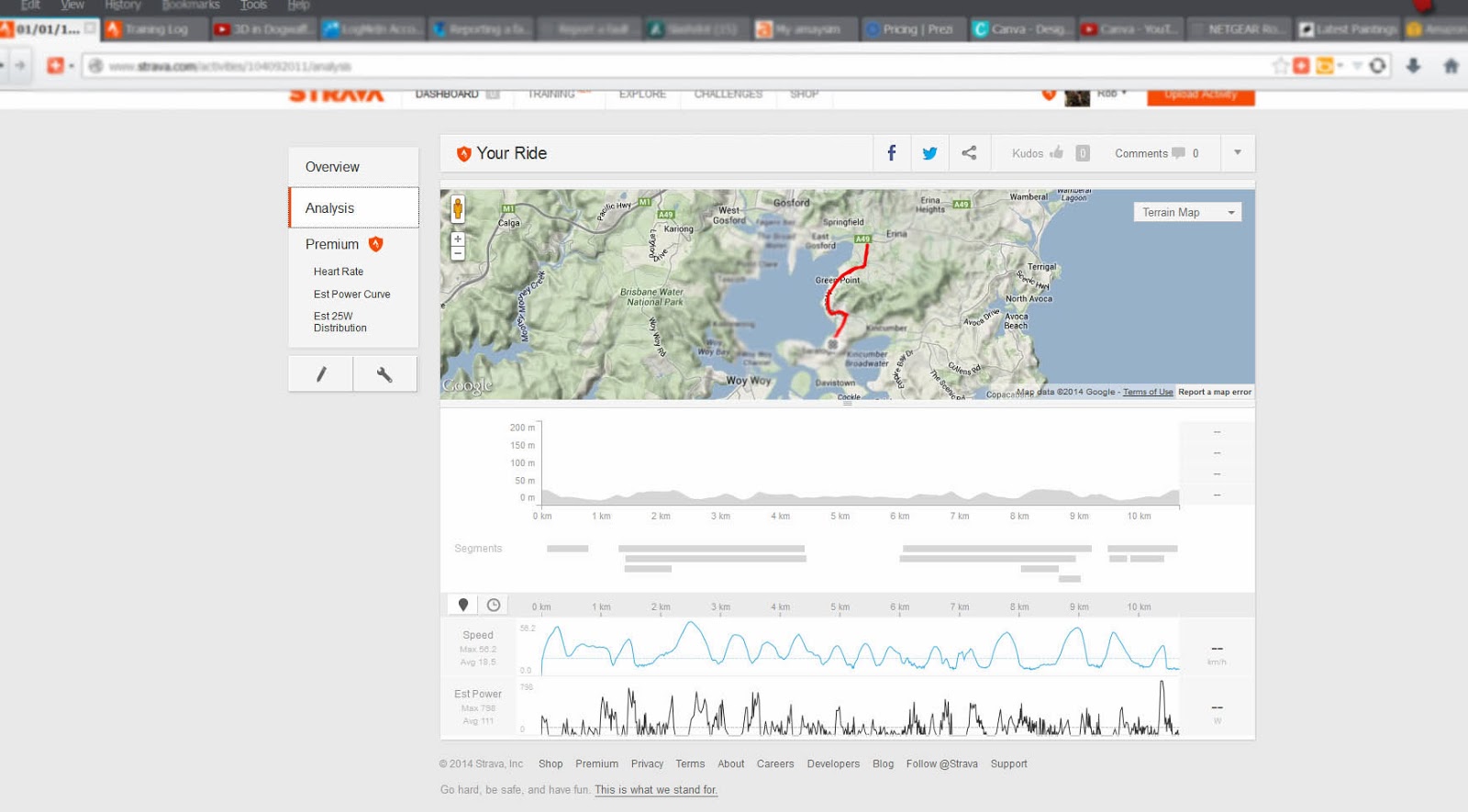 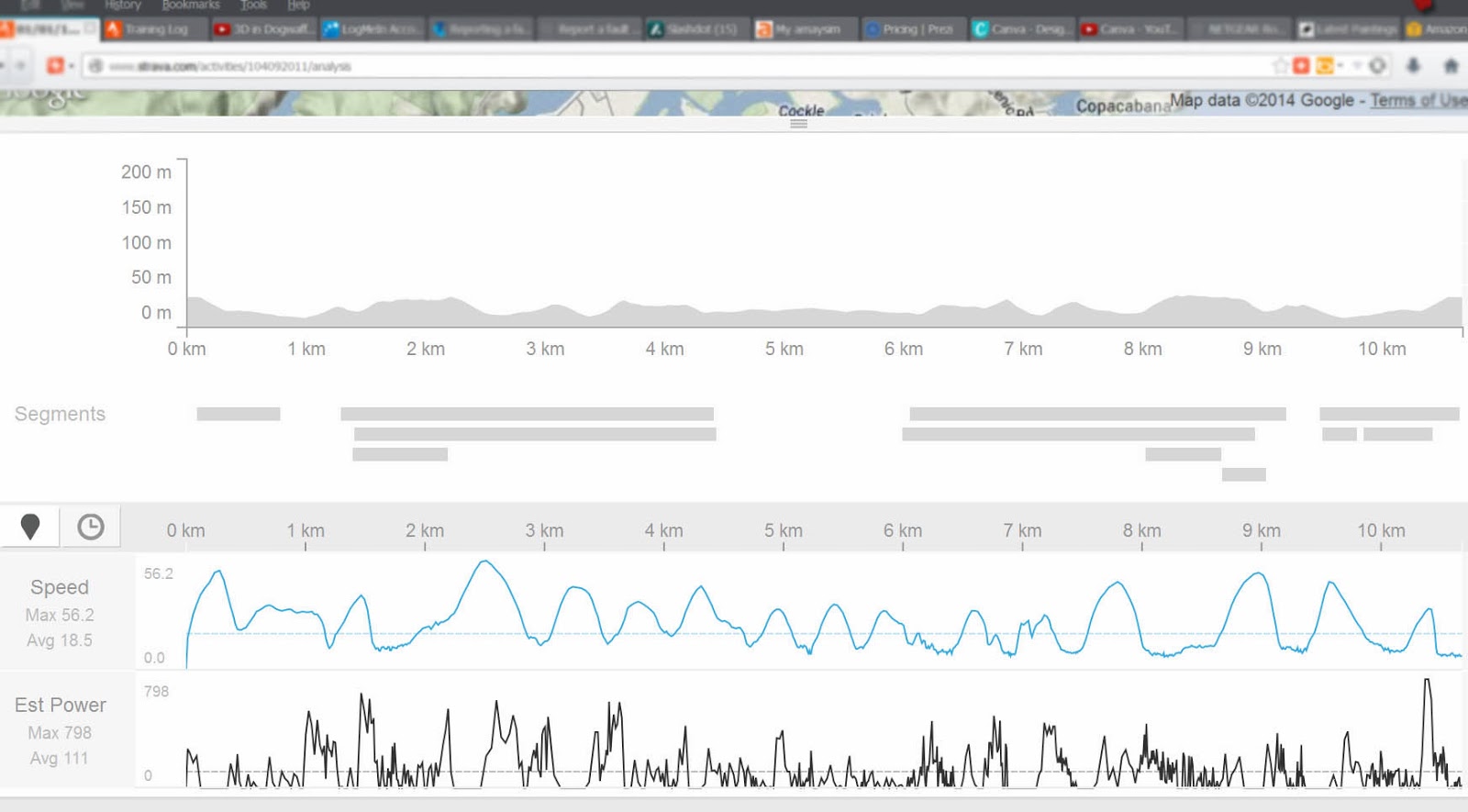 And the figures prove it! 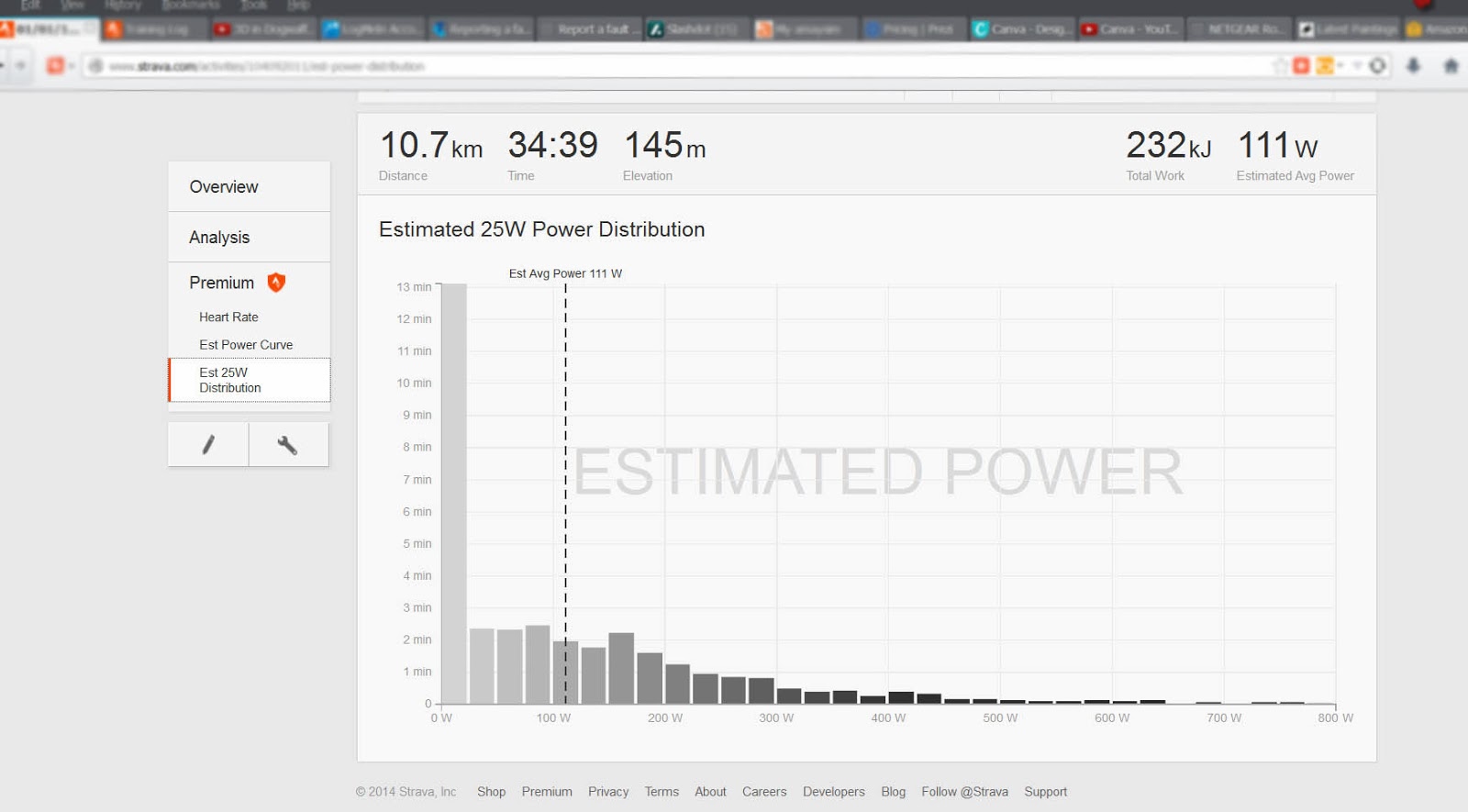 'Creeping' is the word 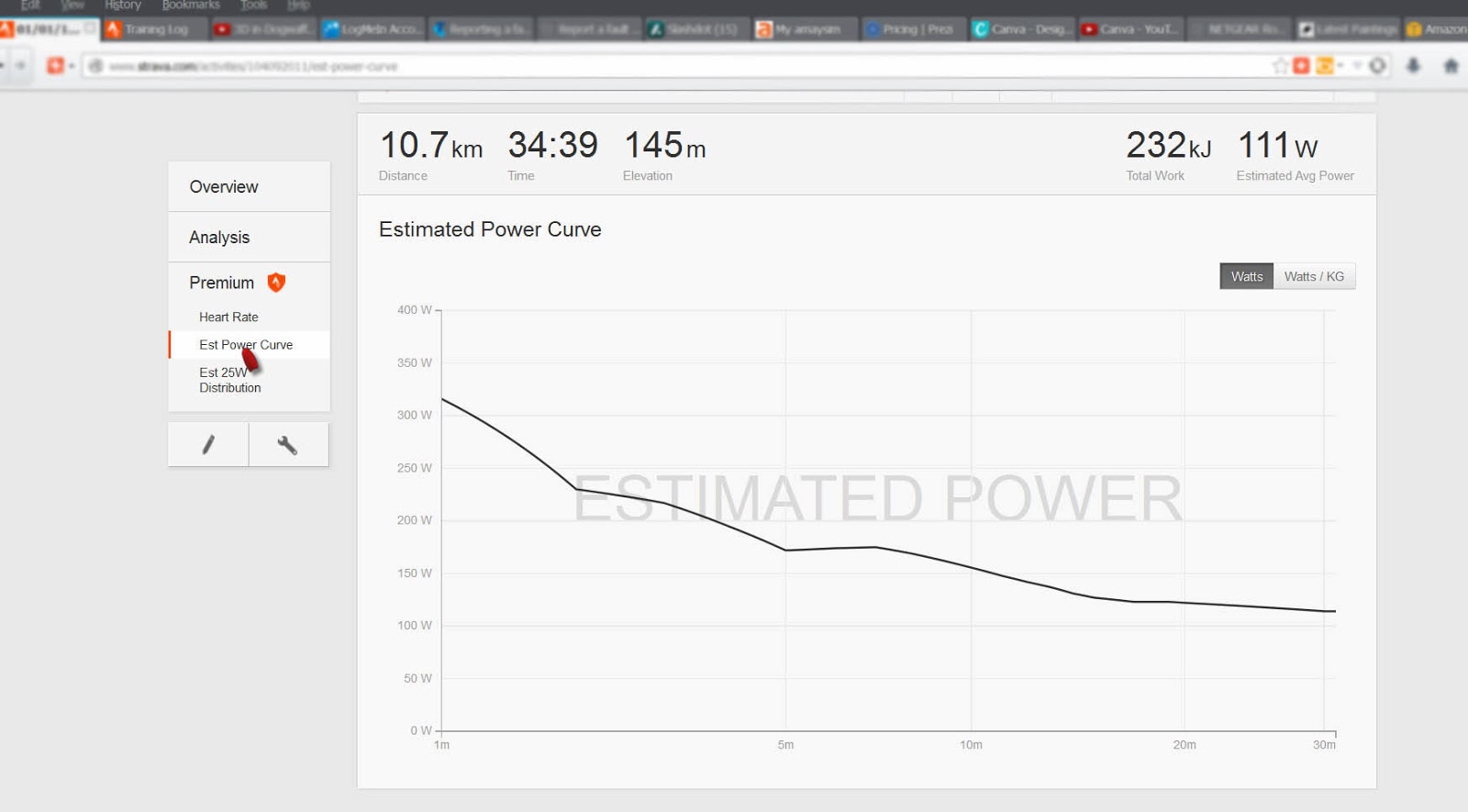 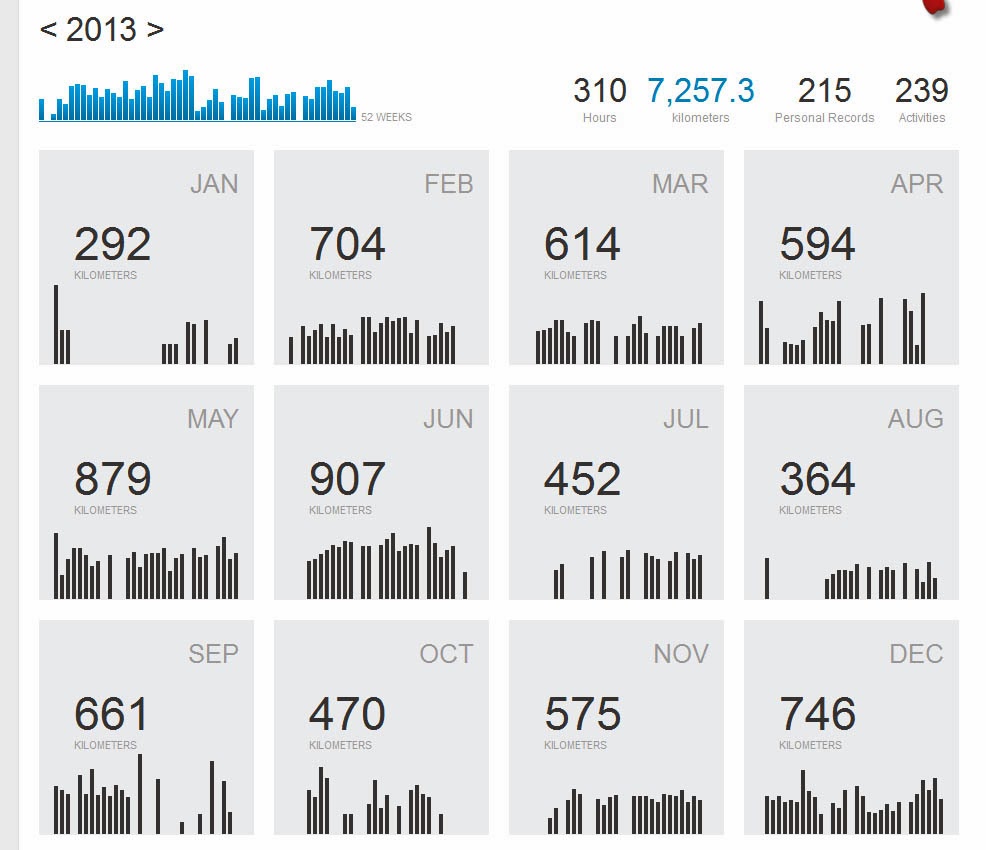 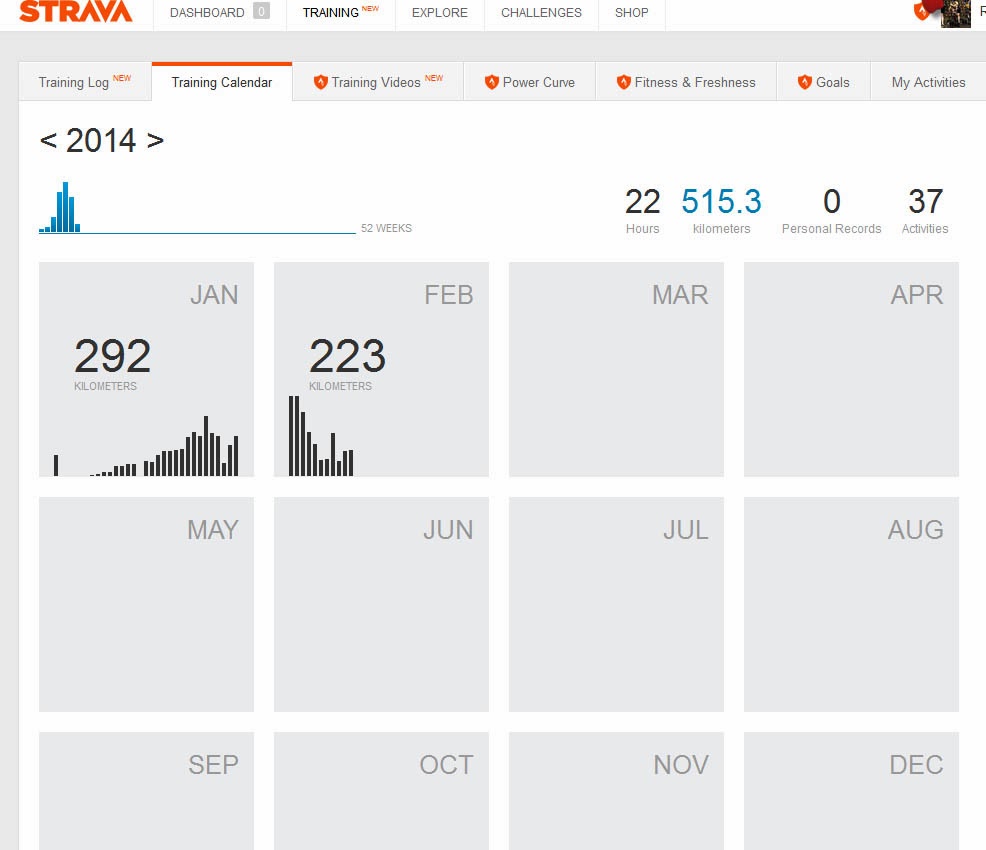 Hopefully I'll keep it up...

Something else to add to my long list of broken bits!

Double the training used to work. Now I'm not so sure. Or don't let age slow you down!

OK, so it 'used' to work. When I was 25 or so, anyway. Even when I was 35. But it started to go awry when I turned 42 or so. I'd always been relatively sensible in terms of avoiding over-training, making sure I ate right, or close anyway, and getting a bit of sleep. But the rules of thumb seemed to be breaking down. One moment all was well and consecutive 100km races on a weekend were fine, the next... not so good.

My rules of thumb? Number one, given a healthy diet and enough rest, is to train three times the distance of any given race per week, averaged over at least one month, preferably 3. After 3, back off, recover and build up again (preferably to a higher level). So if you want to race 100km, train at least 300km per week, average. That gives you base miles, basically. Build on that with specificity. I do have other rules of thumb but that's the main one.

Anyway, it worked for me until I was about 42 or so, but the signs of a problem were there from about 35, if I'd cared to look. I'd injure more easily. I couldn't mix-and-match sports as well as I used to (I was becoming highly cycling-specific but not entirely by choice!). And I was getting sick (mostly colds, mouth ulcers etc; irritants rather than 'show-stoppers') too often. And then it all went pear-shaped from my late 40s onwards. Now some of us will be luckier than others - some even less lucky than me - but my body reacted to aging by randomly mutating, as it were. It may have been stress-related, or environmental exposure to something I didn't even see. And it sent me on a medical-merry-go-round that hasn't ended.

But I persisted with training and racing, even if my racing suffered somewhat and became less frequent (I also had a young family, so was time-poor.) And that continued activity may have helped me fend off stage 2 of my medical maladies. Good aerobic fitness may well have protected me from the worst of my genetic (and perhaps dietary) failings. Which is to say that my heart attack at age 56 (whilst training, of course) was less severe than it may have been. And after 6 days off the bike I was back on - the trainer, anyway. A month or so later I am back on the road, feeling good - if a bit tentative.

What struck me down was high blood pressure, genetics and perhaps a love of dairy products. One coronary artery was significantly clogged and (since this was a new experience to me) I didn't recognise all of the early signs. Sure, I was 'treating' the high blood pressure with training (it works, up to a point, too). And I was still strong - still setting and re-setting Strava KOMs for example - but I became exhausted far too easily. There was no 'pain' as such, just lethargy and a feeling that I should 'go easy' today. Almost every day. At the time I put it down to all of the other medical issues I have collected (as you do) as well as "getting older". But when these new, sudden pains came I recognised immediately that although I had never experienced exactly this crushing sensation before, or the pain in both arms, I knew what the problem was: the heart. And I realised also that I had come 'close' to a similar feeling at the sharp end of a long sprint after a hard crit, several times. But unlike previous occasions I remained breathless and in pain, and it didn't go away. Not when I slowed down, nor even when I stopped.

Being both stupid and a cyclist (the 2 go hand-in-hand) I rode home with the pain, if rather slowly. I ran through some alternative options and even saw an ambulance and thought about flagging it down. I also remembered I had a mobile phone, my wife could pick me up in the car. Then again, I thought, maybe this is just an adverse reaction to the usual prescription medication I took this morning and it'll get better. Maybe I can just ride through this?

Oh yeah, and I live on a hill. My GPS data tells me it was the slowest I had ever ridden that hill, too. But I still wasn't the slowest. (Yes, I checked in Strava to be sure.) Although I knew with 90% certainty it was a heart attack I still wondered how I could ride home, uphill, whilst having an attack. Is that possible? And since I was averaging 200km/week I wondered how it was even possible that this could be happening at all. But it was.

The best part of 5 days in hospital and 3 stents have 'fixed' the clogged artery, now I just have to rebuild and get confident again. It takes time. So today's lesson? Don't think it can't happen. Cyclists - even long-time obsessively daily trainers like me - can have heart attacks. So be alert and react quickly and appropriately (like, stop riding and get medical help). Don't hesitate.

And yes, that daily training probably minimised the damage as well as fended off the day of the eventual heart attack itself. But listen to your body; if you aren't getting the training effect you used to get - and you are even going backwards - don't double the miles, instead take a rest or even have a chat with a doctor. It may just be over-training, lack of rest - or even an early warning sign of something far, far worse!